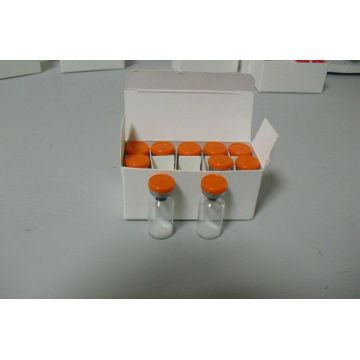 Model NO.: 863288-34-0 Customized: Non-Customized Suitable for: Adult Purity: >98% Color: White Storage: Dry Cool Place Certificate: GMP Function: Bodybuilding Appearance: White Powder Specification: 2mg/vial HS Code: 2801100000 Powder: Yes Certification: GMP State: Solid CAS: 863288-34-0 Type: Pharmaceutical Intermediate Grade: Medicine Grade Product Name: Cjc-1295 MOQ: 10vials Trademark: Filter Origin: Shanghai Product details:
CJC-1295 DAC has shown some amazing results as a hormone releasing hormone (GHRH) analog. Not only has CJC-1295 shown the ability to increase hormone and IGF-I secretion and its benefits, but it has been able to do so in very large amounts. Recent research studies have shown that CJC - 1295 stimulates GH and IGF-1 Secretion, and will keep a steady increase of HGH and IGF-1 with no increase in prolactin, leading to intense fat loss, and increases protein synthesis.
CJC-1295 DAC is a long acting Hormone Releasing Hormone, which causes the anterior pituitary  to release more hormone. GHRH is released in pulses in the body, which alternate with corresponding pulses of somatostatin (growth-hormone inhibiting-hormone). Clinical Research was first conducted for CJC-1295 during the mid-2000s. The objective of the peptide was to treat visceral fat deposits in obese AIDS patients, as increased levels of exogenous hgH are presumed to increase lipolysis (fat loss). The clinical research was ultimately successful for most research subjects. Ghrelin, released from the gut, which circulates and acts as a hunger hormone, has synergistic activity in the body with GHRH and also suppresses somatostatin to make way for the GHRH pulse. Studies shows that combining a GHRP-6 with CJC 1295 DAC, significantly increase the release of GH and IGF-1 production without an increase in prolactin. An example of a GHRP (GH Releasing Peptide) is Hexarelin or GHRP-2. CJC 1295 DAC is a exceptionally designed peptide and is known for being the finest of the hGH secretogues. The DAC (Drug Affinity Complex) portion increases the half-life by binding with serum albumin and protects the CJC-1295 DAC peptide from degradation. This was formed when a lysine link was bounded to DACs to a reactive chemical called maleimidoproprionic acid (MPA).
CJC-1295 DAC vs. CJC-1295 No DAC
CJC-1295 DAC and CJC-1295 (also known as Modified GRF 1-29) are both Hormone Releasing Hormones (GHRH). Their action in the human body is identical but the difference between the two peptides are the span of the half-life. Modified GRF 1-29 and Sermorelin have a very short acting half-life of about 30 minutes, while CJC-1295 DAC has a half-life that can last up to approximately 8 days. Many a scientist have reported that the short half-life of Sermorelinand Modified GRF 1-29 is considered to be much more natural as they produce a short pulse of Human Hormone.
ConjuChem and The Development of CJC-1295 DAC
CJC-1295 DAC is a tetrasubstituted peptide analogue of Growth Hormone Releasing Hormones with D-Ala, Gln, Ala, and Leu substitutions at positions 2, 8, 15, and 27 respectively. A Canadian biotechnology companyConjuChem had invented CJC-1295. Clinical Research on CJC-1295 first began during the mid-2000s. The goal of the peptide, acting to raise like Ipamorelin, was to treat visceral fat deposits in obese AIDS patients because it is presumed that increased levels of exogenous increase fat loss, or lipolysis. In one study, results showed that the measured GH release in rats over a two hour period showed that CJC-1295 released twice as much GH as CJC-1293 DAC. This result makes it preferable for immediate effectiveness as a result of the longer peak. With the use of a Hormone Releasing Peptide (GHRP), such as Hormone Releasing Hexapeptide (GHRP-6)in conjuction with CJC-1295 DAC, a study has shown that the GHRP's create a Hormone pulse which helps the CJC-1295 work effectively. Clinical research's involving CJC-1295 have shown that it had been successful for most research subjects.
Application & More information for CJC-1295 without DAC

Releasing Hormone (GHRH), which is the endogenously secreted GHRH by the arcuate nucleus of the hypothalamus of the human body, is 44 amino acids long. It was discovered, however, that only the first 29 amino acids of the protein were equally as effective in binding to receptors on the pituitary gland as the full 44 Amino Acid structure. The first 29 amino acids in its protein structure were then isolated, which was then called GRF 1-29, but the problem with this derivative of GHRH was the fact that it was rapidly metabolized and cleared from the body by enzymes. Studies have reported that GRF 1-29's half-life is less than 10 minutes and as little as 5 minutes. This was obviously not enough time to ensure a maximized and sustained release ofHGH from the pituitary gland, as studies have demonstrated that the full potential of an HGH pulse from the pituitary requires at least 30 minutes as evidenced by the fact that much higher HGH levels (50 times greater) were observed 15 - 30 minutes into subcutaneous administration of GHRH analogues.

Therefore, the solution to this was to modify GRF 1-29 by replacing various amino acids in its structure with other amino acids that would provide a greater resistance to breakdown and cleavage by enzymes. There were many modified analogues developed, and Mod GRF 1-29 (CJC-1295 without DAC) was eventually selected for use, which demonstrated the most promising effects. Mod GRF 1-29 is a modification of GRF 1-29, specifically at amino acids #2, #8, #15, and #27. The result is an extended half-life to that of at least 30 minutes.

Mod GRF 1-29 acts upon receptors located in the anterior pituitary gland, and signals the pituitary gland to increase Human  production and cause a release of massive quantities of Human Hormone in a pulsatile manner. The effects of Mod GRF 1-29 are very similar from what would be expected from synthetic HGH administration over the long term, although the amount of time that the released human growth hormone will remain in circulation is of a far less amount of time than synthetic Human Growth Hormone does. Therefore, multiple applications of Mod GRF 1-29 is recommended throughout the day in order to simulate Human Growth Hormone levels that remain high on a constant basis. Mod GRF 1-29 (CJC-1295 without DAC) is commonly combined with a Ghrelin mimetic (also known as a GHRP - Releasing Hexapeptide), such as GHRP-6, GHRP-2, Hexarelin, or Ipamorelin in order to initiate and amplify a greater pulse from the pituitary compared to Mod GRF 1-29 used solitarily on its own.

Our process:
The quality control process
1)Purchasing
Thorough market research, understand the price of raw materials and performance.To the procurement source to understand fully, and fully guarantee the quality of the procurement of raw materials.
2) Inspection
Four steps: sampling, sample pretreatment, measuring and data processing.
3) Producing
a)Each operator must do self-inspection of producs and make the corresponding inspection records.
b)Full-time inspectors through check the operator self-inspection, and review and sign in the corresponding record. Full-time inspection is responsible for inspection of finished product, and make the finished product incoming inspection records.
4) Before selling
Test result can be provided before selling.
Third-party detection institution is allowed if you are not satisfied with test results.
Our advantages:
1. Quality:
Our company is a professional production of hormone intermediates for many years, our products have exported to Germany,Spain, UK, USA, Australia, Middle East, and so on other country, and we have got very good feedback from our customers, you can trust us.
And we are the manufactory, so no problem for us to control the quality.
2.Payment method: Western Union,TT.
3.Service: Best service with after-sales service to all clients.
4.Delivery:
Sample Order :Package will be shipped with 3days after payment. We can send it via UP, EMS, HK Air Post, DHL or othermethod. We have a professional and stable logistics, and we can deliver the package smoothly around 3 to 5 days.


Why choose Filter biotech 's products? Contact us if you need more details on Chemical. We are ready to answer your questions on packaging, logistics, certification or any other aspects about Steriods Powder、Hormone. If these products fail to match your need, please contact us and we would like to provide relevant information.

Email to this supplier